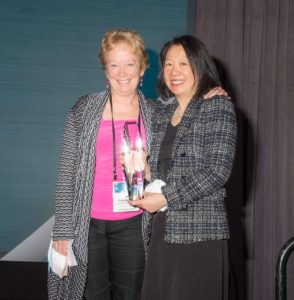 The Trailblazer Award (TA) was established by the SUS in 2020 to honor pioneering individuals who have established new areas of surgical investigation and/or innovative surgical thought processes that have the potential to be groundbreaking. The inaugural TA recipient was Dr. George P. Yang (Past-SUS President) for his dedication in promoting Asians in academic surgery and in the establishment of the Society of Asian Academic Surgeons. At the 2022 Academic Surgical Congress, the TA was awarded to Dr. Julie A. Freischlag of the Wake Forest University School of Medicine. Dr. Freischlag was elected to receive this honor by her peers from an extremely competitive slate of nominees. Dr. Freischlag was introduced by her friend and mentee, Dr. Sandra Wong (Past-SUS President). During the introduction, Dr. Wong described many of Dr. Freischlag’s trailblazing “First” accolades which included being the first female President of the Association of Veterans Affairs Surgeons, the first female Chair of Surgery at one of the oldest surgical training institutions in the U.S. (The Johns Hopkins University School of Medicine), first female President of the Society for Vascular Surgery, and first female President of the Society of Surgical Chairs, which undoubtedly qualifies her for this award. Dr. Freischlag received this award with grace and humility. Despite her countless accomplishments, Dr. Freischlag focused her acceptance speech on work-life balance and the importance of having “peace of the heart” in life.