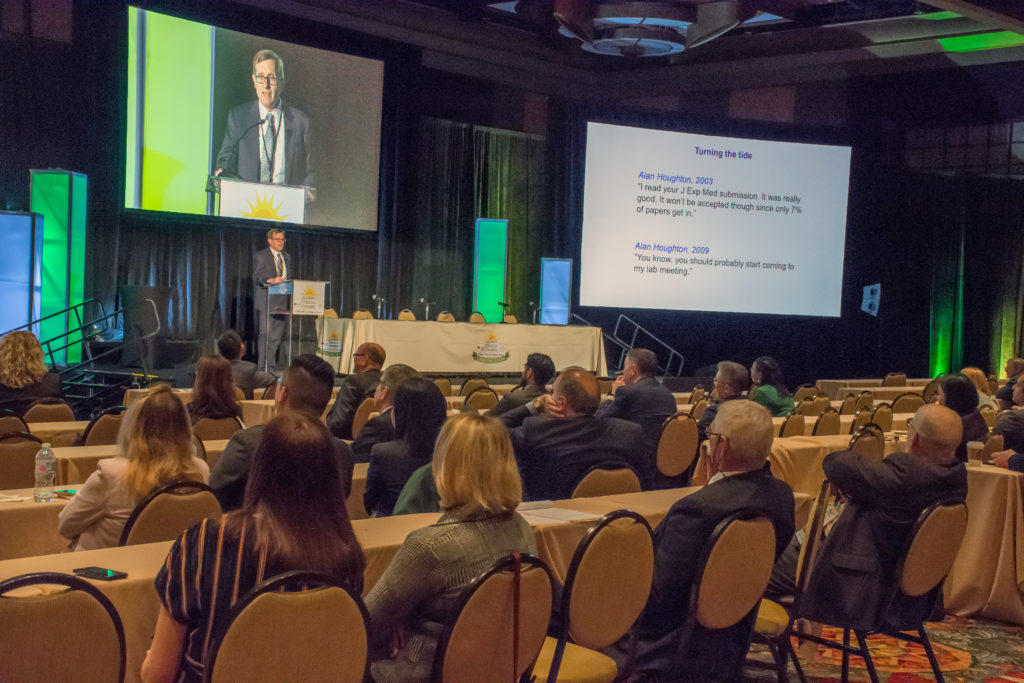 The final speaker of Dr. Allan Tsung’s Presidential Session was Dr. Ronald DeMatteo, Chairman of Surgery at the University of Pennsylvania.

He eloquently described Academic Surgery as a wide range of options and that the choices a clinician and an investigator encounter require similar skills. For both you need passion, creativity, sweat, sacrifice, and resilience. He described his academic journey, which began in 1999 at Memorial Sloan Kettering Cancer Center. There were many barriers he encountered while trying to begin his career as a surgeon scientist. Many told him he should ” focus on surgery rather than research”. Through a combination of dedication, perseverance and luck his career took unexpected turns and he had great successes. He worked on gastrointestinal stromal tumors (GIST), which not many people cared about, at the right time. Imatinib had just come on the market and he adjusted Dr. Brennan’s clinical trial for GIST to develop ACOSOG Z9001 a Phase II trial: Imatinib or placebo after GIST resection. This jump-started his career, however his findings that the immune system had a significant role on the therapeutic effect of Imatinib were met with resistance. He received significant push back and criticism, but after a 30-page rebuttal the journal accepted the work.

Both as a surgeon and an investigator you need to have passion and you can never be satisfied. His parting words were:

1. Disregard the naysayers
2. Research is a privilege, and an obligation
3. Play in both worlds
4. Failure is temporary, and repetitive
5. Go in the opposite direction
6. Novelty is novel
7. A low impact project still takes a lot of effort, and often as much time as the high impact project
8. Cherish the unexpected finding because it is the failed experiment that you want to look at to find the unexpected findings
9. Stay hungry