When an outbreak of Zika virus endangered the health of countless Americans two years ago, the Department of Health and Human Services and other government officials tackled the issue with valiant efforts. The administration requested an emergency supplemental appropriation of $1.86 billion in response to the crisis. Many prevention and education projects were pursued, outreach campaigns launched, officials even pushed for the development of a vaccine.

The lethality of firearm injury and death significantly exceeds the burden of disease that the Zika virus claims.  This year the CDC reports a record number of annual firearm-related fatalities at nearly 40,000 deaths or 109 deaths per day, a rate more than this nation has seen in over 20 years.  During the past decade, guns killed more Americans than AIDS, war, and illegal drug overdoses combined. While the human carnage of firearm injury and death should be enough, there is also a significant economic impact that results in billions of dollars attributed to this public health crisis. According to estimates, the annual financial burden associated with firearm-related injuries is $2.8 billion only for hospital costs.  This does not include the dramatic and long-term toll on families across America, lost work and deterioration in the quality of life sustained which are overall unimaginable.

One would expect policymakers to be preoccupied with this national threat but to this day they remain unwilling in their ability to make fully informed, data-backed decisions about who should have access to firearms, when and how they should access them, and how mass shootings can be prevented.

With a relatively unlimited access to firearms, we remain limited in the necessary data that will move us beyond providing basic national statistics or trends.  At a time when federal research into firearm-related injury and deaths has been virtually been non-existent, we continue to see an increase in the frequency of mass shootings and young men of color being killed daily on the streets of our inner cities.  This must push us to question the role we need to take as healthcare professionals that are front and center of caring for these patients. 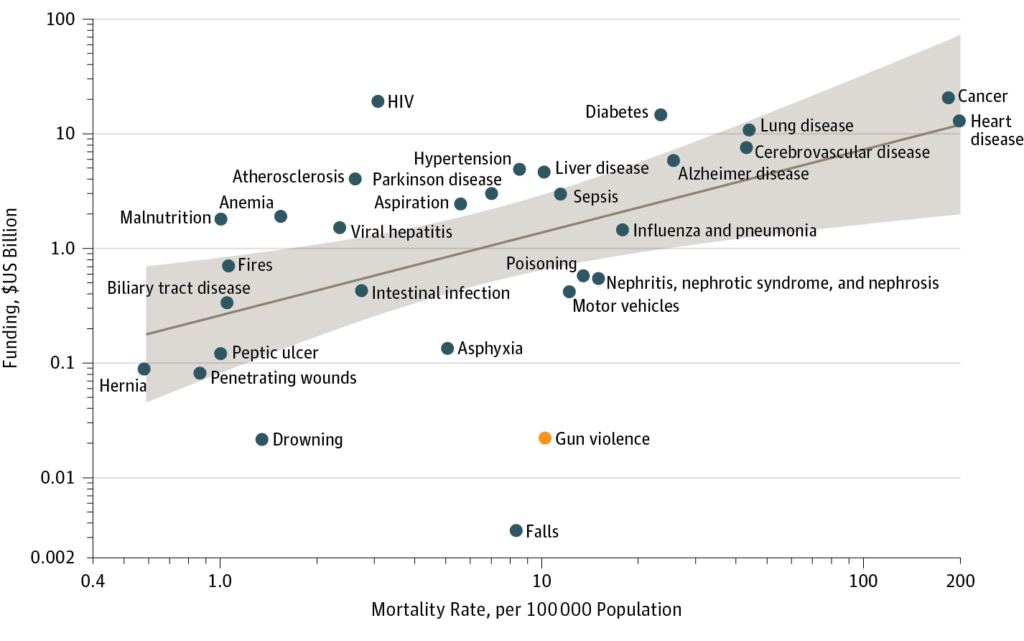 The National Rifle Association (NRA) pushed Congress in 1995 to stop the CDC from spending taxpayer money on research that advocated gun control. Congress then passed the Dickey Amendment (1996), and eliminated federal funding that effectively ended the CDC’s study of firearm-related injury and death as a public health issue. The result is  600,000 plus deaths from gunshot wounds over the past two decades.

Furthermore, the gun lobby downplays the physician’s role as primary stakeholders in this issue at a time when the carnage of firearm injury and death has become a routine experience in trauma centers across the country. A recent tweet by the NRA warned doctors to “to stay in their lane” which was released just prior to another devastating mass shooting in Thousand Oaks. There is a need to match a bold commitment to research and science with an equal focus on creating a social and policy framework. The movement on social media (@ThisIsOurLane) has united the medical community and made it clear that we are critical group in providing solutions to reducing firearm injury and death in this country.

Firearm injury prevention calls for creative solutions that capitalize on the collective expertise of multiple stakeholders from a diverse group of professionals including but not limited to lawmakers, elected officials, gun owners, healthcare providers, researchers, and advocates on all sides seek common ground as we work on tackling this public health crisis.

The American College of Surgeons – Committee on Trauma (ACS-COT) has provided gun safety guidelines for the community. The safest way to store a firearm at home is unloaded and securely locked in a safe and remote location with the bullets locked safely in a separate container. Furthermore, there is a need to raise awareness about mental health and the psychosocial factors that increase the underlying risk of death from suicide, which also happens to comprise greatest proportion of firearm related deaths. Mental health care should be readily accessible to individuals who engage in violent behavior, alcohol or drug abuse, and experience suicidal ideations/depression. A collaborative effort must be instituted between gun retails, gun rights advocates, mental health care workers and suicide prevention groups across the nation. Gun retailers can help individuals at high risk of suicide and refer them for counseling.

Firearm injury prevention is not about gun control. A false narrative that is being spread attempts to polarize this debate and result in a divisive approach that does not represent the thoughts and views of the American people.  Many physicians own firearms and as a movement, we are not anti-gun; our focus is on preventing injury and death, which will inevitably result in  saving human lives. As clinicians it is clear that  This Is Our Lane and we have both the possibility and responsibility to ensure the saftey of our children, familities, and communities by tackling this public health crisis.