MEETING OVERVIEW
The 14th Annual Academic Surgical Congress was a great success. The meeting took place in Houston, Texas from February 5-7, 2019. The ASC continues to grow with the highest number of scientific session registrants to date (2049 participants). This is a significant increase from 2006 (731 participants) and from 2018 (1818 participants). There were many highlights including Dr. Allan Tsung’s Presidential Address, Dr. Layton F. Rikkers receiving the Life Time Achievement Award, Dr. George Yang delivering the Joel Roslyn Lecture, Dr. Silvana Perretta delivering the BJS Lecture, along with all the parallel sessions and Hot Topic lunch sessions. We inducted 56 new members into the SUS. The social media presence of the ASC was highlighted throughout the meeting (#[email protected]). In 2020 the meeting will be at the Hilton Buena Vista Palace in Orlando, Florida from February 4-6, 2020.

Drs. Tsung and Haider opened the Presidential Session on Tuesday February 5, 2019. Both Presidents thanked Drs. Jayme Locke and Eugene Kim for orchestrating the review of over 1600 abstracts. The International Sister Society guests of the SUS and AAS were introduced and asked to stand. Photographs and short biographies of all the invited International guests were highlighted in the meeting app. 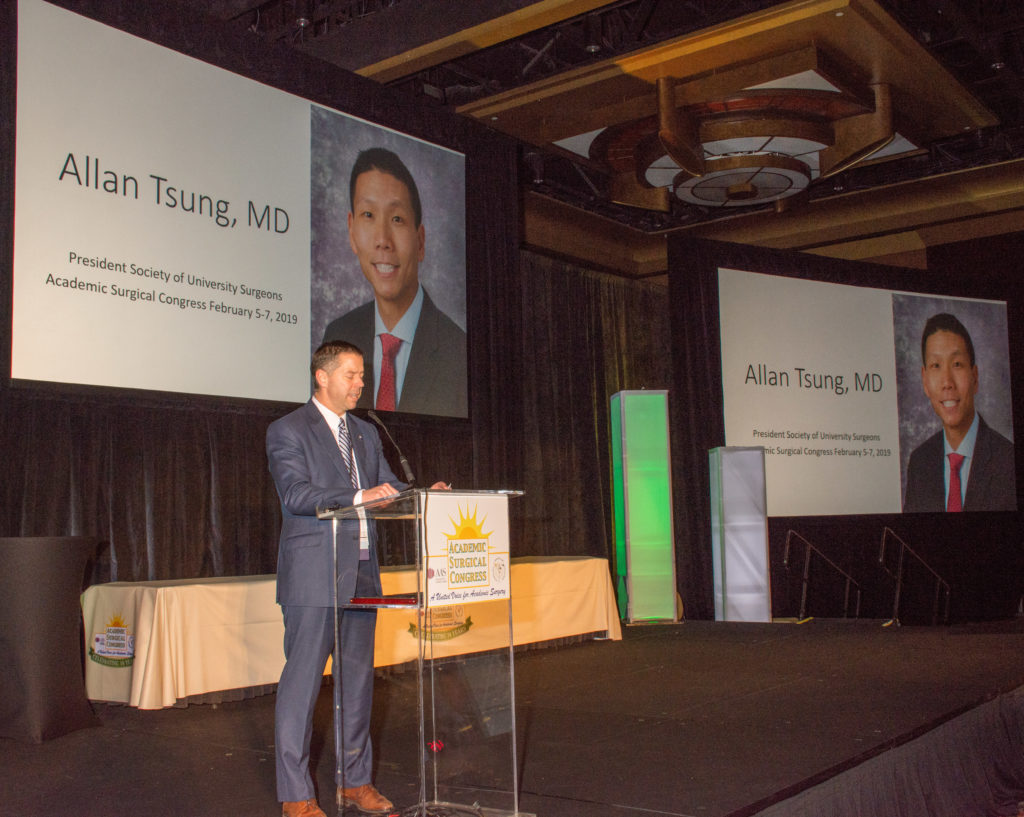 Tuesday, February 5, 2019
Dr. Greg Kennedy, current President-Elect of the SUS, gave a poignant introduction of SUS President Dr. Allan Tsung. Dr. Tsung was born to Taiwanese parents in Cincinnati in 1973. His father was a radiation oncologist and was incredibly influential in his decision to become surgeon. It was not surprising to hear that Dr. Tsung decided he would be a surgeon at the age of 6 and he worked tirelessly to achieve this goal over the years. At the age of 15, his life was forever changed when his father was diagnosed with metastatic rectal cancer and died of the disease. His mother went back to work, often working 2-3 jobs. To help with the family finances, Dr. Tsung bused tables and worked odd jobs. After graduation from high school, he went to Cornell, where he graduated cum laude with a degree in Biology. He also met his future wife Eva at Cornell. He followed Eva to New York City where she was a graduate student in pharmacology at Columbia while he received his MD at SUNY Downstate. His research career began with a year at the NIH in the Howard Hughes Program with Dr. Steve Rosenberg studying tumor immunology. After completion of medical school, Dr. Tsung completed a surgical residency at the University of Pittsburgh where he stayed on staff until a few weeks ago when he started as Chief of Surgical Oncology at The Ohio State University. Dr. Kennedy concluded with a description of Dr. Tsung’s intense dedication to his wife, daughter and son.

Dr. Tsung described his journey from internship to full Professor at the University of Pittsburgh. The ideal balance at the University of Pittsburgh was disrupted a year ago with a phone call from Dr. Tim Pawlik. He remembers the phone conversation clearly. Dr. Pawlik said, “We are building something really special and I think you will really thrive here. Go Buckeyes”. Dr. Tsung noted that he had no idea why Dr. Pawlik said that and wondered, “What is a buckeye?” This phone call prompted long runs to spent thinking and putting his accomplishments in perspective of his goals. He realized that his accomplishments had nothing to do with why he went into academic surgery. He wondered, “Do I even have passion for academic surgery or am I just a surgeon who is at an academic institution”. His desire had been to make an impact in medicine.

He then described his motivation for going into medicine and surgery. He showed a picture of his father and noted that because of his father, he wanted to go into academic surgery. Allan reminded the crowd that, “The essence of academia is to make an IMPACT”.

However, to have an “impact” you need to remain passionate about what you do. In Dr. Tsung’s estimation, the passion can be maintained if you have:

Dr. Tsung then went on to use examples of his mentors to highlight these characteristics.

CURIOSITY
Dr. Timothy Billiar is a Chair, leader, administrator and surgeon scientist who is always focused, intelligent, and very intimidating. Dr. Tsung described the incredible impact he had on the residents at the University of Pittsburgh. The residents were required to present their research and Dr. Billiar always had the most innovative, relevant, and impactful questions because he was always curious. Dr. Billiar taught Dr. Tsung that the qualities of the master clinician and scientist are the same – an insatiable thirst for knowledge and to not be afraid to ask questions because you are so curious that you will not stop until you find the answer.

Dr. Patricia Donahoe was the first female Division Chief at the Massachusetts General Hospital and the first female Professor in Surgery at Harvard Medical School. No matter what obstacle she would continue to persevere with an endless amount of energy and curiosity. She described an academic career as peeling an onion because the more you peel the more knowledge you gain. As you dig deeper into the onion, you are humbled because you become a neophyte again and again.

Dr. Steven Rosenberg, a pioneer in cancer immunotherapy, was one of the first surgeon scientists. He described how in 1968 Dr. Rosenberg cared for a patient with acute cholecystitis. The patient had been opened and closed for gastric cancer 10 years prior, however at the time of the open cholecystectomy there was no evidence of cancer. While immunotherapy is currently the “hot” trend, for decades it had been dismissed and ridiculed. Many scientists focused on angiogenesis or other areas, however Dr. Rosenberg persevered – trying, failing and re-trying.

Dr. Thomas Starzl, the father of liver transplantation, was often called Dr. Frankenstein as he developed liver transplantation. He often said, “the space between a heroic event and being an outcast is not that great”. Dr. Tsung described the history of Dr. Starzl’s career as he began his work in a garage operating on dogs. In 1963 he transplanted a 3-year-old boy with Dr. Rutherford as the senior resident. While the liver was well perfused, the child died on the table from a hemorrhagic diathesis. Five consecutive patients died on the table. Dr. Starzl was accused of many things including a lack of ethics. He then spent 4 years working on modes of immunosuppression and the surgical technique. In 1967 he performed the first successful liver transplantation.

ADAPTABILITY
Dr. Tsung noted that Drs. Billiar, Donahoe, Rosenberg and Starzl all had an insatiable curiosity and perseverance, and also adaptability.

He noted that academic surgery requires adaptability. In the past basic science was the only academic career path, but now there are so many paths to academic success.

The environment of academic surgery is adapting to the modern surgeon, in that it supports many different definitions of success and impact. He presented data showing an over 50% decline in the percent of basic science abstracts presented at the Academic Surgical Congress from 2011-2015. Rather than bemoan this fact, he reiterated that this makes us better as we adapt to the changing times.

The Chinese New Year is represented by an ever-blooming flower. The academic surgical flower is passion, which you need to nurture with adaptability, passion, and curiosity. Dr. Tsung noted that the path of the academic surgeon is an incredibly difficult one. He urged us all to take inspiration from these 4 surgeons and all the surgeons who surround and inspire us. He reiterated that the SUS provides a peer group that shares your priorities and values. He left us with the final thoughts that having a tribe like the SUS is critically important to your development and satisfaction as a surgeon. He urged the audience to get involved in national organizations surrounding yourself with people with like values and ideals.

D. Allan Tsung was an outstanding President of the SUS. He served with distinction and honor. He developed ground breaking relationships with other societies and has put the society on the road to great collaborations. His contributions to the SUS will be felt for years to come. 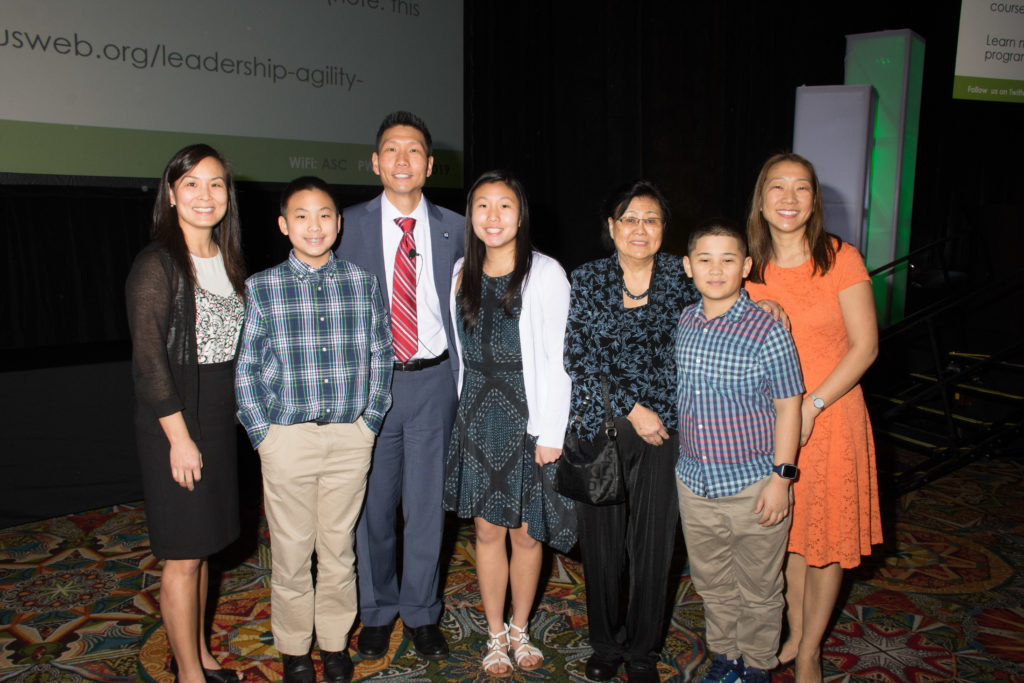