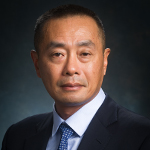 The SUS created the Trailblazer Award in 2020. This award is designed to recognize individuals who have developed a new area of academic pursuit or opened new avenues of investigation or academic thought that have the potential to be groundbreaking for years to come. The “trailblazing” contributions of the awardee can be broadly interpreted and is not limited to traditional surgical science. The individual can have created a new and sustained domain of scholarship or knowledge.

The SUS seeks to honor and recognize these individuals because of their embodiment of the principles of the Society and to establish role models for future generations of surgeons to honor and emulate their contributions to the science of surgery.

Dr. George Yang was nominated and selected by his peers based on his leadership and contributions to the Society of University Surgeons as well as his unwavering vision, commitment, and dedication to the promotion of Asians in academic surgical leadership. He was lauded for seeking to address the underrepresentation of Asians in academic surgical leadership. Along with 8 other Asian academic surgeons, he was the principal driving force in the founding of the Society of Asian Academic Surgeons (SAAS): the mission was to focus on personal and professional development to help prepare future generations of Asian surgeons for leadership. Dr. Yang served as the first SAAS Executive Director, organizing the first annual SAAS meeting at Stanford University in 2016. Membership has grown exponentially to over 700 members and this year SAAS was recognized by the ACS with a newly appointed representative to the ACS Board of Governors. The SAAS Foundation has funded 19 visiting professorships, 6 residents to attend the Fundamentals of Surgical Research course, 6 junior faculty to attend the Surgical Investigator’s Course, 1 member to attend the SUS Leadership Agility Program and the Surgical Leaders Fellowship Grant with the ASA. Dr. Yang was described as “a trailblazer for academic Asian surgeons, as he has led not only by example but has created a path and a legacy for younger generations to follow.”

Finding Out What Suits You

Dr. George Yang first became interested in medicine because his parents strongly suggested this as a field he could pursue. Coming from a poorer background, they thought of medicine as a practical profession and a way to ensure a lifelong job. What interested him most was the intellectual side of medicine, specifically figuring out problems. This in turn is what drew him to academic medicine. Early in medical school, Dr. Yang thought about becoming a pediatrician but after spending a day in a general pediatrics clinic, he decided it was not for him. He had not thought about being a surgeon until he did his surgery rotation. It had a faster pace and there was a definitiveness to it. He liked the physical process of operating and found surgery suited his personality best.

Dr. Yang also obtained a PhD in molecular genetics. At the time of his PhD training, molecular biology was ascendant. Dr. Yang recalled it was the scientific approach providing a mechanism for so much of the physiology previously described. His PhD thesis was on the characterization of proteins involved in controlling cell growth.

After completing medical school at Northwestern University, Dr. Yang completed his general surgery residency at Stanford University, where he remained a faculty member until moving to the University of Alabama at Birmingham in 2018. As a resident, his mentor was Dr. Ron Weigel, who is now the Chair of Surgery at Iowa. Dr. Weigel created a federally-funded research program in breast cancer while establishing a busy endocrine surgery practice and taught him how to combine high level science with surgery.

As a faculty member, Dr. Mike Longaker was the mentor who taught him how to succeed. Dr. Longaker came to Stanford right as Dr. Yang was finishing his chief residency year. They met after Dr. Longaker gave a talk on his research leading Dr. Yang to join his research group as junior faculty. He recalled Dr. Longaker was one of the few surgeons who saw the value of spending most of his time in the laboratory. Dr. Longaker guided him during his faculty years and was the person who got him engaged with the SUS as well.

In making the decision to leave Stanford, Dr. Yang felt this was an opportunity he had not had before to lead an organization. He has been very happy with the opportunities afforded to him at UAB and the community that he has there.

The SUS is important to Dr. Yang because it provided him with the opportunity to network and meet people and cites the SUS as being the reason that he has found many of his opportunities. As a Past-President of the SUS, Dr. Yang’s advice for how to progress in the SUS is getting engaged. His first SUS assignment was as a Membership Committee member. He felt the organization would give you more and more responsibility based on how well you accomplished a task. This eventually led to his appointment as the Chair on the Publications Committee. Dr. Yang stated that “at every step I looked at it not as something I was doing on the side but that this part of my job and focused on it as much as if it were a part of the job, in addition to taking care of patients and doing research.” The SUS values the extra effort its members put into making it a premier surgical society.

Dr. Yang agreed COVID could have a major impact on the challenges for mid-career surgeons. It has impacted how surgeons use professional meetings for networking, affecting the ability of young surgeons to have their work recognized. The SUS will need to think about how its members can continue to network and form connections and meet collaborators or peers in a way that doesn’t always involve face to face meetings.

With regards to personal challenges, Dr. Yang stated, “there can be pressure to do clinical and academic work.” He feels that the key is for young surgeons to think critically about what it is they enjoy intellectually and personally and finding a way to bring it all together. There are many components to finding personal success and it does not always involve ascending the academic ladder. Knowing the things that you are truly passionate about in your work is important, but it is equally important to mesh this with family and friends.

Staying happy is also about maintaining interests outside of the realm of academic surgery. A surprising passion of Dr. Yang through the years has been ultimate frisbee. He began playing in college and would go on to play on club teams in various tournaments around the country. He last played in the Grand Master (over 40) Division and hopes to get a chance to play in the Great Grand Master (over 50) Division if time and health allow.

Dr. Yang was among the founding members and driving forces behind the creation of the Society of Asian Academic Surgeons (SAAS) in 2010. Most of the founders were first- or second- generation Asian Americans who had grown up in non-Asian areas. They were subject to comments, taunts and jokes growing up and tried not to be seen as “too Asian” so they could fit in. They were reconnecting with the Asian culture and the society was initially a social group allowing people to connect. The founders each contributed the first dues to support regular get-togethers over food. They invited friends and asked people to pay dues to perpetuate the society.

Within a few years, it became apparent the membership was passionate about finding a way to increase Asian representation among the leadership in academic surgery. Dr. Yang became the first SAAS Executive Director and worked to manage the finances and incorporate as a non-profit. The first major initiative was to sponsor grants to support younger surgeons going into academia. They partnered with the AAS and the SUS to raise money for the Resident/Fellow Development Scholarship and Junior Faculty Award to send winners to the AAS Fall Courses and the SUS Surgical Investigator’s Course, respectively.

The successful fundraising demonstrated the deep enthusiasm that existed among its members and they made the commitment to create a true academic society with a focus on the career development of its members. The first Annual Meeting was held in 2016 hosted by Stanford University. Each year, the program focuses on elements of personal and career development with a focus on the specific concerns of Asians.

Why Is It Important?

Although built on supporting Asians in academic surgery, Dr. Yang states that the society “is open to anyone and everyone who wants to join. We also use the broadest definition of Asian and include all friends and allies.” Given the recent social justice movement and subsequent re-examination of DEI within the surgical community, SAAS is equally passionate about working with and supporting other societies representing underrepresented individuals. These groups are not about being divisive “but it’s more about finding a group where we have shared experiences. There are things that we have gone through that we can commiserate about. Every surgeon remembers bonding as a resident with your fellow residents about the trials and tribulations of training. It was a chance to share your experiences and not to separate people into camps, and that is what SAAS provides for its members. “

The Society of University Surgeons is honored to present Dr. George Yang with the 2020 inaugural Trailblazer Award at the Academic Surgical Congress on February 3, 2021, taking place on a virtual platform. He is the true embodiment of the type of individual that this award seeks to recognize.