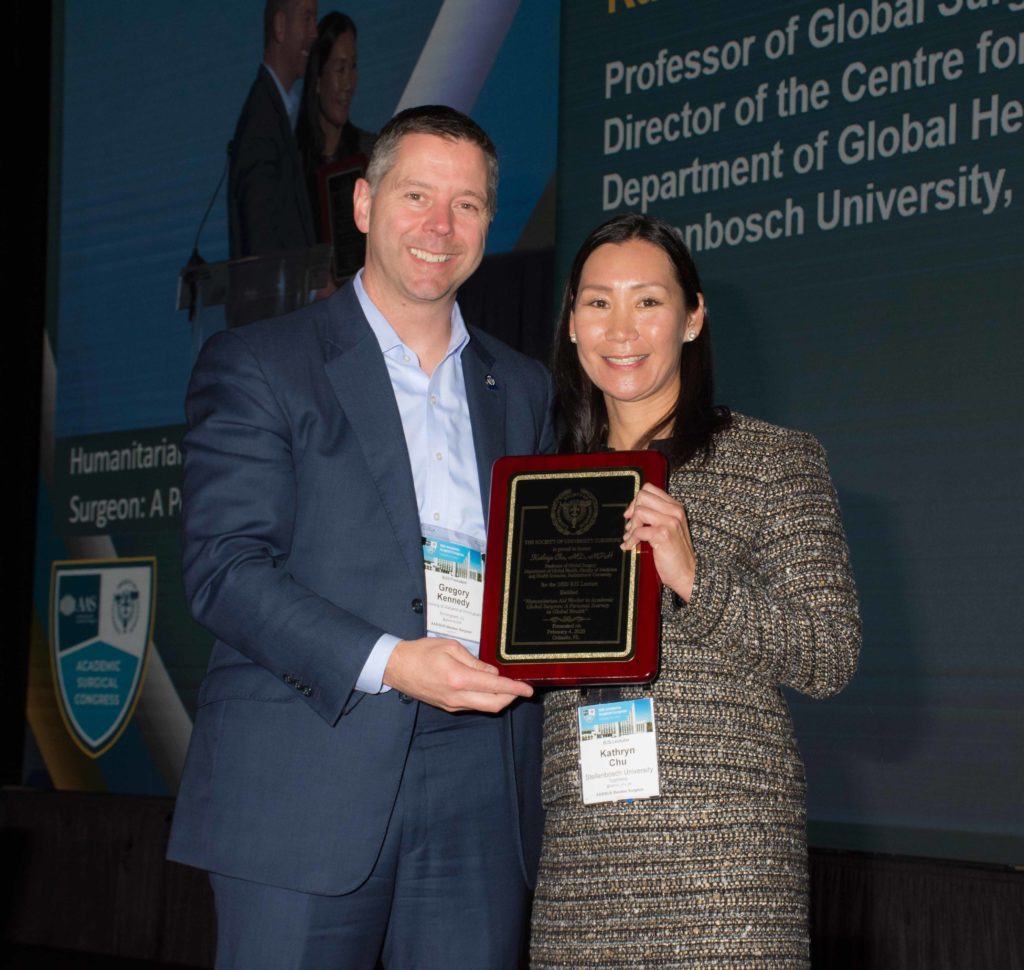 The BJS Lecture was given by Dr. Kathryn Chu, who has an incredibly inspiring story of her altruistic journey. Dr. Chu was born in the US to Chinese immigrants and received her undergraduate degree from Stanford University.  She took a gap year to teach English in China followed by medical school and general surgery residency at UCSF.  She completed her colorectal fellowship at the Lahey clinic in 2006. For the last 13 years she has been based in Africa, where she is Professor and Director of the Center for Global Surgery at Stellenbosch University.

Dr. Chu described how teaching English in China helped her realize that being born in the US was an “accident of birth” and that she could have easily been born in a country with less opportunities. She decided that her purpose in life was to use her education and training to help those in less resourced environments.  During medical school rotations in Africa and Latin America, she realized that surgeons had a large impact on the populations and were able to cure many conditions.  Dr. Nancy Asher convinced her to stay at UCSF for residency.  During residency she received a Fulbright Scholarship which allowed her to get a masters in Public Health in Developing Countries at the London School of Hygiene and Tropical Medicine.  Many were skeptical of her path and Dr. Asher told her to find a focus and not to focus on the “hobby” of global surgery.

Dr. Chu stayed true to her mission and went to Zambia as a missionary surgeon at the Macha Mission Hospital after her colorectal fellowship.  She realized she did not want to be a “service surgeon” who just occasionally dropped in.  However, how to really have an impact was not entirely clear.  She got a job at Johns Hopkins, where she received a grant to study inflammatory bowel disease in Africa.  This research helped her understand that she truly wanted to be based in Africa rather than the US.  She left academic surgery to work for a medical humanitarian organization, Médecins Sans Frontiers (MSF) where she worked in operational research as the surgery focal point.  Over four years she participated in many short missions as a surgeon and also consulted on numerous surgical projects.  Work in humanitarian surgery demonstrated the impact of the political context on health care and health equity.  She gave the example of Democratic Republic of Congo, which has many natural resources, but corrupt leadership results in poor healthcare for many.  She also learned that a surgeon is only one cog in a big wheel.  In order to provide surgical care in any health system-public, private, or humanitarian-many components such as infrastructure, clean water, electricity, sterilization and equipment are needed.  The surgeon is only useful when all else is in place.

After leaving MSF, she moved to Rwanda and became a surgical educator under Human Resources for Health (HRH), a US funded a $152 million program. After the Rwandan genocide in 1994, many physicians-including surgeons-were killed or forced to flee. The objective of the HRH program was the train a new generation of specialists, including surgeons.  The work was rewarding because it helped to build a sustainable change in the health system. There were several challenges, however. She learned that collaborations with African colleagues needed to be formed slowly, as trust takes time to build. In addition, Rwandan surgical colleagues were busy and overworked therefore not always eager to be “twinned” but saw their US colleagues as clinical relief.

She currently lives in South Africa, which has the most inequitable healthcare system in the world.  She quickly learned that service delivery will not improve without changes in policy.  Currently she is the Director for Centre for Global surgery in Stellenbosch University, which is a hub of excellence in Global Health.

Her current research addresses reducing the 3 delays to surgical care:
1st delay in seeking care – why don’t patients come to the health facility?
2nd delay reaching care – what are the barriers to getting to the hospital?
3rd delay receiving care – why are surgical services not delivered in time? Ie no OR time

The second objective of her current research addresses education and training.  She would like to train a cadre of quality academic global surgery researchers, and facilitate South-South clinical training partnerships with other African countries.

Most importantly, she wants to work closely with African policymakers to ensure that surgical care is included in universal health coverage.  Research into the barriers to surgical care if it improves patient care.

After this amazing career trajectory, she addressed the trainees in the audience.  Ask yourself do you want to be involved in Global Surgery? If yes what type of time commitment are you willing to invest -2 weeks, 2 years, 20 years?

Do you want to be involved in research, education or service delivery?  Will your department support you?  What are your career goals? How will these goals affect your personal life?

She then warned the audience of frequent pitfalls