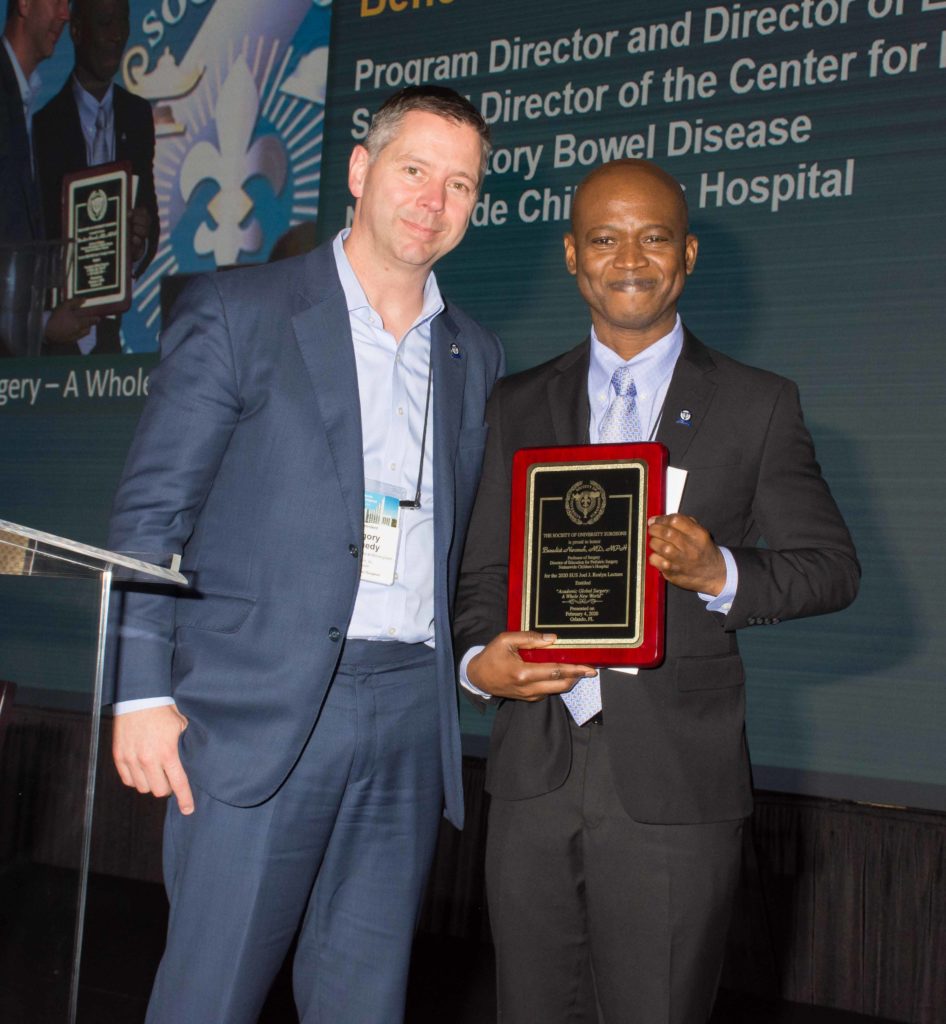 Dr. Benedict Nwomeh was introduced as the 20th Joel Roslyn lecturer. Dr. Nwomeh is a Professor of Surgery and Vice-Chair of Global Surgery at Ohio State and the Pediatric Surgery Fellowship Program Director at Nationwide Children’s Hospital, as well as the Surgical Director of the Center of Pediatric and Adolescent IBD.

Dr. Nwomeh began with a heartfelt thank you to Dr. Kennedy for dedicating the Roslyn and BJS lectureships to Global Surgery. Dr. Nwomeh noted that during that Roslyn’s era the discipline of academic global surgery did not exist, and marveled at the diversity of the academic portfolios to be found currently in the AAS and SUS.

Dr. Nwomeh expressed gratitude for the friendship and mentorship he had received from the AAS and SUS, citing some former leaders; people like his senior resident Dr. David Hackham, his program director Dr. Henri Ford, and his current Chairman Dr. Tim Pawlik who have supported his career.

In 2007 the AAS developed an Ad hoc committee during Dr. Fiemu E. Nwariaku’s AAS Presidency.  This was one of the first trips to a low-income country, which was not a traditional medical mission.  There was significant skepticism since it was not bench research or outcomes research.  The mission was “to go teach surgeons everywhere how to do research”.  This Ad Hoc committee was able to develop a new curriculum for the first surgical educator course, which was held during the 2008 West African College of Surgeons meeting.  Since then the course has also been given in many other countries, including  the College of Surgeons of East, Central and Southern Africa (COSECSA) region, and in nearly every continent.

Dr. Nwomeh went on to describe the first trip to Sierra Leone on Feb 7, 2008, with President Nwariaku leading the group.  They met with the Minister of Health of Sierra Leone who told them that “There are as many surgeons in this room as in the entire country.”  In Sierra Leone, the population of 6 million people had only 5 surgeons, as compared to the USA, which had 55 surgeons per 100,000 people.

Along with thanking Dr. Nwariaku, he summoned the inspirational words of Dr. David Tapper (1945-2002) whom during his 2001 APSA Presidential address challenged surgeons to reach for “audacious goals.” Dr. Nwomeh asked medical students and residents in the audience to rise to the challenge of helping to build surgical capacity sand reducing burden of surgical diseases everywhere. He cited the example of Dr. Peter Kingham, who is the Director of Global Disparities at MSKCC, and teaches surgeons in West Africa how to evaluate and treat hepatobiliary problems.

Dr. Nwomeh highlighted that only 7% of the surgical work force in sub-Saharan Africa are women. He noted that the presence of female role models during the AAS and SUS trips was of particular importance, citing the pioneering contribution of Susan Brundage MD, MPH, Prof and Chair of Trauma Education in London.,  It was at that time that Dr. Lilian Kao joined a trip abroad.  She was the second AAS elected officer after Dr. Nwariaku to join a trip. Her presence had a powerful inspirational effect on the women participants at that course.

Dr. Nwomeh recommended to the students and residents in the audience that Global Surgery is an incredibly rewarding career path.  However, you must understand whether it fits into your Department’s mission.  Who will cover the missing RVUs, grants, and publications?

Finally, Dr. Nwomeh thanked the members and especially the “visionary leaders of the AAS and SUS”, whom he said have over the years helped to widen the scope of what it means to be an academic surgeon, and opened the doors to a whole new world, a world where academic global surgery is a respected field, not just a hobby. 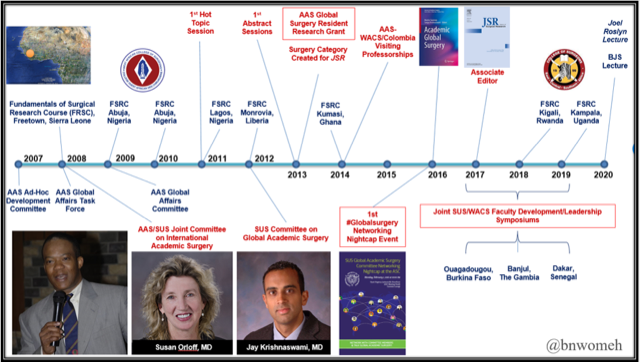