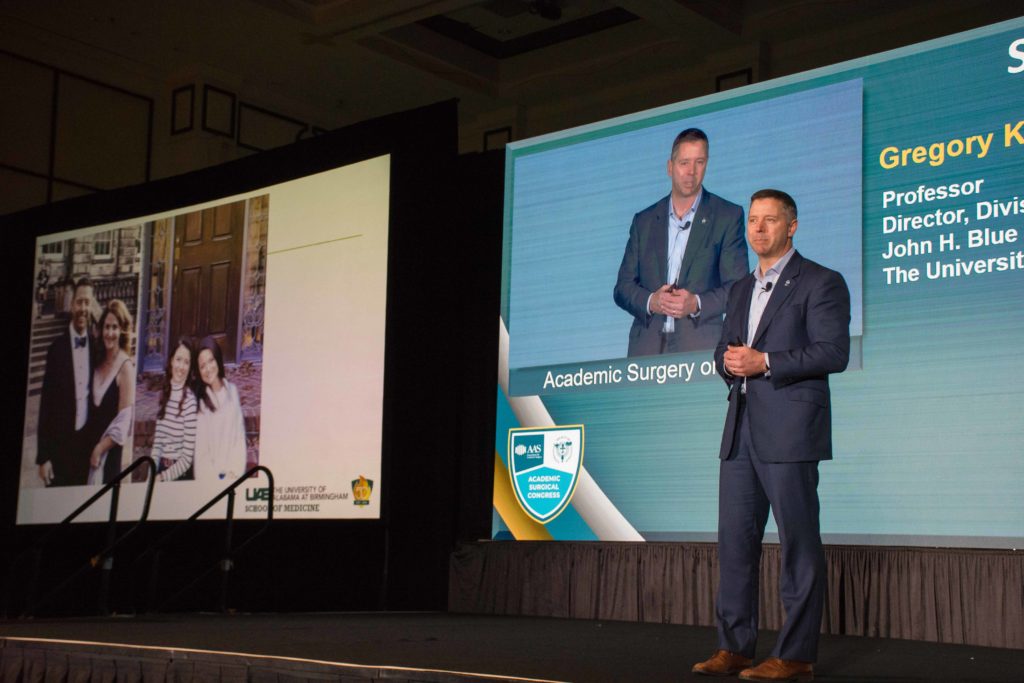 Dr. Kennedy gave an insightful presidential address. He started by thanking the important people in his life. Of course, this included his family, his mentors, and his current group. It is clear that Dr. Kennedy is supported by many people and he values their support and them as people.

Following this touching short acknowledgement session, Dr. Kennedy dived into his talk titled, “Academic Surgery on Purpose.” The title of the talk is interesting as it suggests that one can be an academic surgeon almost by some random chance. It was clear this title was intentional and Greg even indicated that his own trajectory may not have been as purposeful as he would have liked. Overall, the talk was spectacular and can be seen on the SUS website.

Purpose of Society
The talk started with a discussion of surgical societies. It is clear that many of us join various groups without an idea why the particular society exists. In fact, that was the case when Greg joined the SUS. However, through his work in the society, he began to understand why the SUS exists and the leadership team of the SUS has focused the society on the midcareer surgeon leaving no doubt why the organization is important in the hierarchy of surgical societies.

Dr. Kennedy highlighted the many offerings the SUS has for its members. The mid-career course, the leadership agility program, and the promising leaders program are 3 leadership opportunities provided by the SUS. All of these have been developed within the last 10 years and are outstanding opportunities for the members of the SUS.

In addition to the leadership course, the SUS has developed new research grants for its members. The mid-career award is a particularly exciting opportunity first awarded in 2019 to Dr. Clara Lee from the Ohio State University. Dr. Lee has since gotten her R01 award funded. The second mid-career award was awarded in 2020 to Dr. Ankush Gosain.

Personal Journey
After a nice thank you given to the SUS Executive Director, Ms Yumi Hori, Dr. Kennedy spent the next 30 minutes talking about his personal journey and how he has come to see the importance of working with a purpose. He declared himself a self-help/leadership book junkie and upon reading “Start with Why” by Simon Sinek, he started thinking deeper about purpose. As he read and learned more, it became more evident to Dr. Kennedy that his purpose is to use his talents to serve those around him. He made a point that this service can be in the area of clinical work, research, or through leadership.

The second book that impacted Dr. Kennedy was a series published by the Arbinger Institute called “Leadership and Self-Deception.” The book describes how relationships blow-up due to poor personal management. In particular, the book draws attention to how a person is present in an interaction and how people can be in different states. The authors describe individuals living in either a heart at peace, which allows you to see people as people, or in a heart at war. When one’s hear is at peace, you tend to see others hopes, needs, cares, and fears as real as your own. On the other hand, people are seen as obstacles and objects when the heart is at war.

Through this reading and much soul searching, he reevaluated why he was doing what he was doing. In particular, he began asking if he was doing things to help other people or just to help himself? Through a personal story, Dr. Kennedy gave us insight into his struggles and how he has worked to overcome some of these issues. In addition to reading, he participated in mindfulness training. However, he stated the same old thinking leads to the same old behaviors and it wasn’t until he made some major moves that things began to change.

The major move in Dr. Kennedy’s life was a move to Alabama. Here he became the Director of Gastrointestinal Surgery following in the footsteps of Dr. Mary Hawn and Dr. Selwyn Vickers before her. Under the guidance of the surgeons of this group he was able to find freedom and experience true joy in his job. He now has a clear purpose and works through every day with a sense of clarity he has never before seen. Dr. Kennedy then provided 3 principles for finding purpose and 3 principles for staying in purpose.

To find purpose he encouraged us to:
1. Do not confuse passion for purpose: it is clear that passions can change and one can use passion to execute purpose.
2. Strive for vocation not occupation: one’s vocation is realized when purpose and occupation are aligned. Dr. Kennedy encouraged the audience to show vocational courage and align occupation with purpose.
3. Define success for yourself: Here he encouraged the audience to shuck the classic view of success and make it personal. He assured us that no one can define success for you but you.

He then acknowledged that it can be challenging to keep your purpose in view at all times. He recognized that trying to live with purpose can sometimes be a bit grandiose which results in us losing sight of purpose on occasion. To battle this, he provided these three principles:
1. Run towards the challenge: here he encouraged the audience to look towards challenges and use the opportunity to grow in your purpose.
2. Run with your eyes open: here he acknowledged that at times we can get too focused on ourselves and move through life with closed eyes. He encouraged us to keep our eyes open and focused out. In so doing, it will allow us to see others around us and find those who need our help and service.
3. Run with a group: Here Dr. Kennedy claimed that those who run with a group can run farther and achieve more than if they do it alone. He reminded us that the SUS is filled with his group of people and encouraged the audience to find their group.

Dr. Kennedy concluded with a quote from Nietzsche “He who has a why to live can bear almost any how.” This quote reminds him to remember the “why” in what he is doing. He stated for him the “why” is to work towards making the world a better place through service to those around him. He then left us with a challenge to find our why and keep that in mind as you move through your day. He argues that this thinking leads to tremendous emotional freedom and true joy.

Overall, the 2020 Presidential address was a success and left those in the crowd feeling uplifted. It is clear that Dr. Kennedy has found his purpose and is doing exactly what he was meant to do. Congratulations on a great address and a great Presidency! 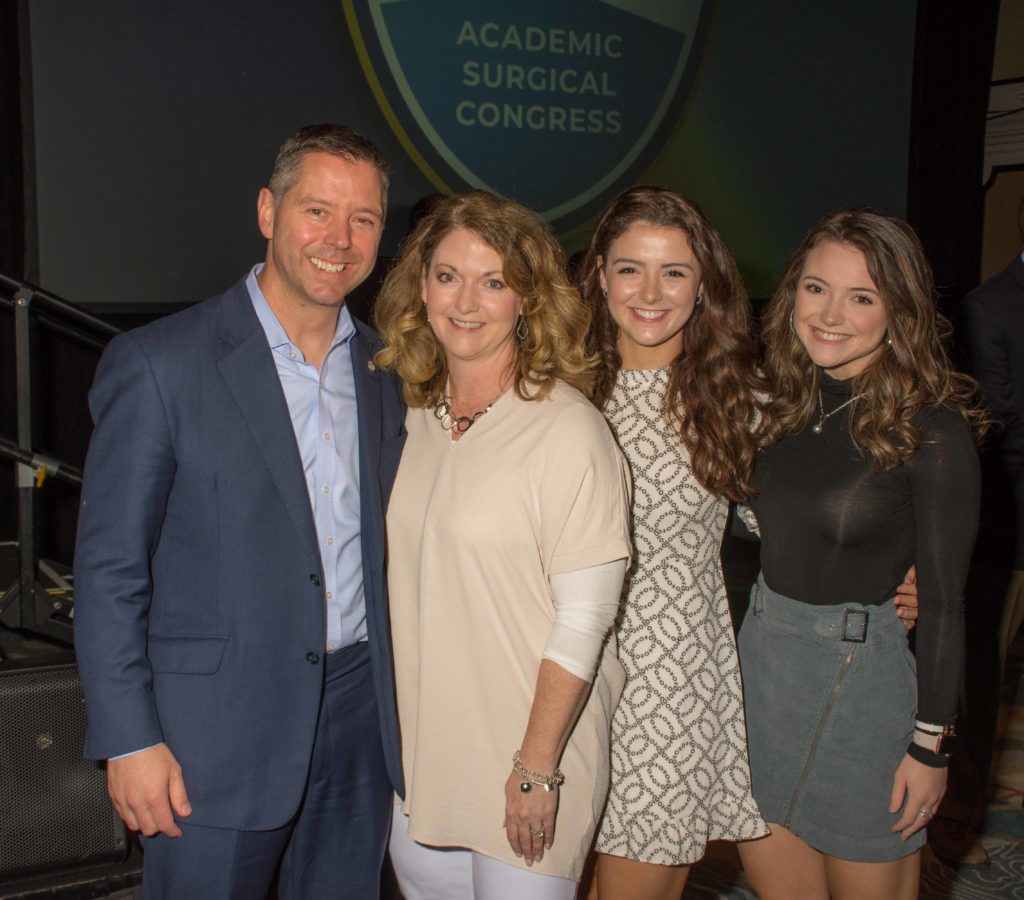